Can I email: a proposal

Caniuse.com is a widely popular site for web developers providing “Browser support tables for modern web technologies”. The site is great for web developers to quickly know whether a web feature has good support or not. But it also helps providing a good picture of disparities between browsers, and how this evolves through time with new browsers versions. The website turned 10 years old this year.

Similar ressources also exists in emails. The most popular is Campaign Monitor’s CSS Guide. The guide has been very popular among email developers. But while it’s a precious and valuable ressource, I see a few problems.

Other guides exist. FreshInbox provides a Kinetic Email CSS Support page with a nicely presented table. I also just discovered Caniuse.email when starting to redact this document. But the four first points listed above also apply.

Some email clients provide official information regarding HTML and CSS support. For example, Gmail provides a Supported CSS Properties & Media Queries page. Microsoft also has a HTML and CSS Rendering Capabilities in Outlook 2007 page. But both are really incomplete and some of the informations are wrong. For example, Google states that Gmail supports the columns properties in CSS, which appears to be false through manual testing.

History of the project

I first became aware of the project after watching a conference by @M-J-Robbins where he announced his team at Rebel (then RebelMail) was working on a site similar to caniuse.com called caniemail.com. A few repos and notes were created on Github. And Rebel made a totally killer logo for the project.

In 2017, Rebel didn’t renew the domain caniemail.com. So I bought it. I first offered to transfer it back to Rebel by contacting Mark on Slack, but it didn’t happen. So I started working on the project, mostly thinking and planning how things could or should be. I made an HTML mockup that I only shared about a year later on Slack during a casual conversation.

I always thought that I could free some time to work more on this. Or that I could use time at my company to work on this. But this never happened. So this is why I’m opening this up today in hope we can get something done.

Caniemail.com should address the problems mentionned above. Thus the project should be:

Here’s a quick UI prototype I had in mind. This can be found on the branch prototype or online at https://www.caniemail.com/prototype/. 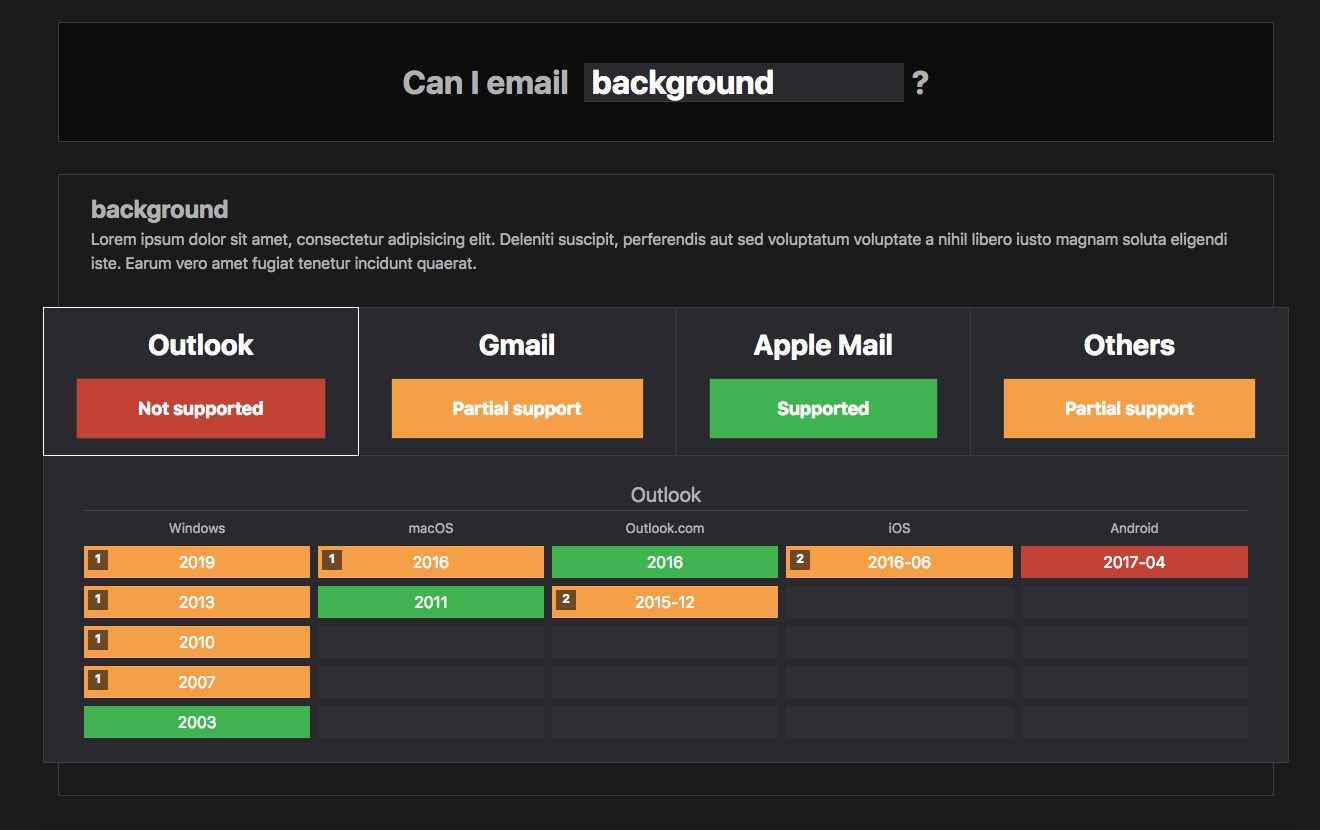 The main idea is to regroup email clients through their “family” names, and show only the few most popular first. (I think Outlook, Gmail and Apple Mail are obvious candidates. But maybe Yahoo should be featured there.)